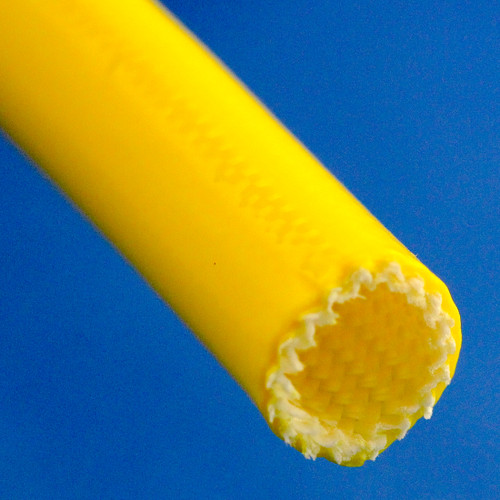 Ben-HarTM Acryl sleeving is manufactured by coating a lightly heat-treated braided fiberglass sleeving with a dielectric film of thermosetting polyacrylate resin qualified for Class F (155°C) systems. The tough acrylate film is highly craze resistant and will withstand severe bending without loss of dielectric properties. It is resistant to acids and most organic solvents and compatible with a broad range of wire enamels ¬acrylic, polyester, polyamide, polyimide, and polyvinylformal. By virtue of crosslinking the acrylate, film will not flow upon application of heat. Acryl Supergrade is extremely durable and rigid, allowing the sleeving to withstand rough assembly handling, mechanical stress, and resistance to cut-through. The coating film will not flow upon application of heat. Ben-HarTM Acryl is resistant to acids, alkalis, organic solvents, and aliphatic hydrocarbons. Slight swelling is produced by aromatic solvents and chlorinated hydrocarbons. Ketones and esters have a softening effect. Ben-HarTM Acryl resists up to 10 megarads of radiation dosage with no discernible effect. When tested in accordance with NEMA VS-1, MIL-I-3190 method B, ASTM D-350, and UL 1441, Ben-HarTM Acryl burns at less than 1.33 inches per minute. Ben-HarTM Supergrade A+ is ideal for form coil applications to eliminate laborious taping and double sleeving, as well as covering and preventing cut-through on brazed connections or motor and transformer leads.